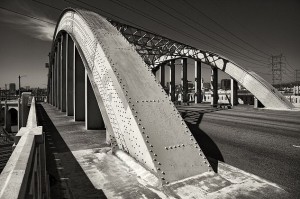 The Sixth Street Viaduct is a viaduct bridge that connects the downtown and Boyle Heights areas of Los Angeles, California. It spans the Los Angeles River, the Santa Ana Freeway (US 101), and the Golden State Freeway (I-5), as well as Metrolink and Union Pacific railroad tracks and several local streets. The viaduct is composed of three independent structures: the reinforced concrete west segment, the central steel arch segment over the river, and the reinforced concrete east segment.

In 1986, the Caltrans bridge survey found the 6th Street Viaduct eligible for inclusion in the National Register of Historic Places.

During the construction of the viaduct, an on-site plant was used to supply the concrete for construction. However, the quality of the concrete turned out to have a high alkali content and lead to an alkali-silica reaction which creates cracks in the concrete and saps the strength of the structure.

Current estimates are that the viaduct has a 70% probability of collapse due to a major earthquake within 50 years.

It is one of the only historic LA River bridges to suffer from ASR. 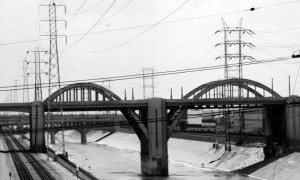 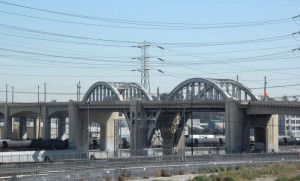 Rancho Cold Storage features an excellent industrial filming location of its own. The family-owned and operated facility has served the Los Angeles area since 1985 and is located near the 6th Street Bridge. This state-of-the-art warehouse facility boasts 2 million cubic feet of interior space, and has been used as the filming location for many music videos, reality TV shows and industrial training videos.

Overlooking the iconic 6th Street Bridge in downtown Los Angeles, the rooftop of Rancho Cold Storage is prime filming location for all types of entertainment. The cinder-block roof features mazes of metal pipes and views of the US-101 and I-5 freeways, Metrolink and Union Pacific rail lines and nearby industrial warehouse facilities, making this section of historic downtown Los Angeles a favorite gritty, urban backdrop for many film productions.

Located in historic downtown Los Angeles, Rancho Cold Storage and the iconic 6th Street Bridge overlook nearby loading docks and warehouse facilities. This industrial, urban neighborhood has provided the filming location for hundreds of productions, including movies, TV shows and music videos. The site of many a chase scene, this versatile and nondescript location has been used as a backdrop for productions set all over the world.